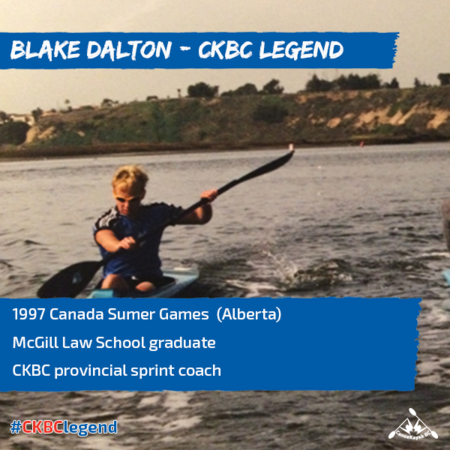 Blake Dalton represented Alberta at the 1997 Canada Summer Games in Brandon Manitoba. His dream of making the national team led to a move to Victoria. After completing law school in Montreal, he returned to B.C. and is now the CKBC Provincial Sprint Coach.

When and why I was in BC:

I moved out to Victoria in the fall of 1999 when I was a young lad. Like many paddlers, I had aspirations of making the National Team. For me, it was an easy decision to move to Victoria: it's a great city to live and train; I could attend school while paddling year round; and the Men's Kayak National Team was based there.

Unfortunately, we lost our coach the following year. Thankfully Marek Ploch stepped in and coached a number of us, including Sara Hopkins and Ryan Cuthbert, for a couple of years. I benefited greatly from Marek’s knowledge and expertise. He eventually moved to China to coach the Olympic Team. In turn, I moved to Montreal with Ryan.

What am I doing now:

I am the BC Provincial Team Coach. It's pretty awesome now to be on the other side and help BC become the province we know that it can be.

I feel like an old man sitting on a porch. I have many stories, but ultimately, I'm most fond of hearing from athletes that I used to coach. It's incredible to see the athletes use the skills that they gained from paddling in other avenues - whether that's in school or in their employment. Like a proud father, I like to then tell others what the athletes have been up to.