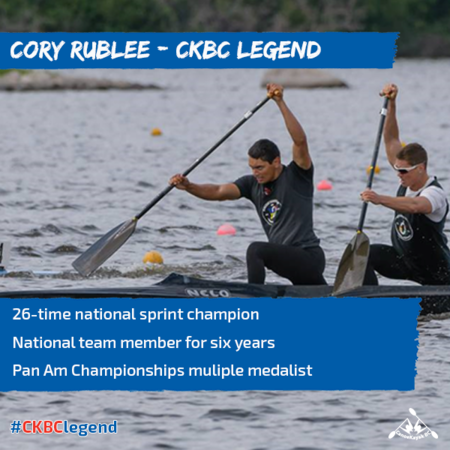 Cory Rublee, the youngest in the family, started paddling because his older brother and sister joined the Kamloops Canoe and Kayak Club. What followed was much more than even he could have expected. During his competitive career he won numerous medals at the Canada Games, Canadian Sprint Championships and, as a six-year member of the national team, various international races.

Now working as a coach, Cory has also worked with CKBC as the Canoe Development Coach, and is helping inspire a new generation of B.C. paddlers. Here's his paddling story in his own words.

How I Started in Paddling

I started paddling in my hometown Kamloops at the summer camp in 1998. My sister Jessie, brother Aaron and I all attended that camp. Both my sister and my brother seemed to like it right away but I wasn’t too keen, it didn’t seem to interest me that much. After the camp Jessie and Aaron both joined the Kamloops Canoe and Kayak Club and because I was the youngest I followed suit.

While I wasn’t interested in paddling at first, the more I tried it the keener I became. Canoeing especially got my attention, it wasn’t like anything else; just balancing was hard. That’s what I liked and still like about canoeing, there’s always something to be better at.

Once I had my balance, I had to work on my steering, once I got that I need to work on handling wash and waves, once I had that I needed to work on paddling for more than 20 strokes at a time. There is always another step, there’s always a chance for self-improvement.

What Am I Doing Now

I am wrapping up my contract with CKBC as the Canoe Development Coach. It’s been a great job where I get to work with all the amazing coaches in BC as well as all the fantastic athletes. I’m just trying to help the clubs, coaches and athletes as much as I can.

While I’ve competed international my favorite paddling memories are from Canada. In my opinion nothing beats racing with your club and friends at National Championships. At Nationals, everyone is so supportive of each other, you really feel like you’re part of a big family.

[Photo: Cory and his brother Aaron paddling C-2 at the National Championships. Photo by Jon Clarke]