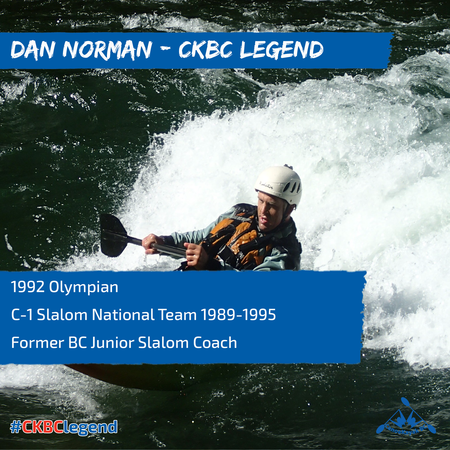 For Dan Norman canoes and paddling have been a part of his life since he was a child. And with hard work, luck and fun, he ultimately paddled in the 1992 Olympics in C-1 whitewater. Following his competitive career, he has remained involved in whitewater and to this day continues to introduce others to his sport.

A CKBC Legend, here is Dan's story in his own words.

I grew up in Toronto, Ontario, but spent most of every childhood summer in Algonquin Park. We did a lot of canoeing as kids – just messing around, fishing, going on little day trips – the canoe was always there (My parents did a canoe trip for their honeymoon).

When I was eight I went to Camp Kandalore in Minden Ontario, where I learned actual skills, and was introduced to a strong canoe culture. The camp was run by Kirk Whipper, founder of the Canadian Canoe Museum, which was originally on the grounds of the camp. It was at Kandalore that I was introduced to whitewater canoeing as a skill progression to prepare us for longer and more remote canoe trips.

In 1981, I was sixteen and I signed up to do a 30 day canoe trip on the Coppermine River in the NWT. To help prepare for that, I went to MKC (Madawaska Kayak Centre) to learn more about whitewater. That summer, the Canadian and American slalom teams were training at MKC to prepare for the World Championships in Bala Wales, and my instructor was Rod Kirkham, a C-2 paddler on the Canadian team. Throughout our weeklong course, he kept pushing my buddy Jim Coffey and me to try harder stuff, and towards the end of the week he put us in a C-2 – our first taste of slalom. When that summer ended, we looked up the contacts that Rod had given us and joined a slalom club in Toronto (Ontario Canoe Cruisers).

The next few years, I was a weekend warrior at local races, always in C-2, and when the courses were easier I would try C-1 as well. I was a slow learner, but stubborn. I found a group of friends who shared the same stubborn streak and we set out to do all kinds of questionable paddling any time we could. My cousin Larry Norman was an important member of this goofy group of friends who set out together to learn how to paddle whitewater C-1, C-2 and kayaks.

Early on, someone showed us the movie Fast and Clean, and despite our goofiness, we had this idea that racing well was something we wanted. The slalom scene was small and even though the group of us were hard to take seriously at first, lots of more experienced paddlers helped where they could. We watched the experts in awe, and tried to learn what we could. People like

Heinz Poenn, Jim and Jeff McColl, Harold Van Winsenn, Bernie Lalonde tried to help us out when they could, but mostly in those days we were left to figure it out the hard way on our own. Looking back, I realize now that even then, I seriously believed I could reach the highest levels of the sport, but I have no idea why or how I could have justified that because I was a long way from anywhere good.

I qualified for my first Ontario team as a C-2 paddler in 1984, and flew to Alberta for my first National Championships that summer. I think by then the hook had already been set, but there was no turning back after that. The experience spurred me on to seek better equipment, find coaches, and learn what I could. My paddling group was pretty ragtag, and I did not show much early promise. 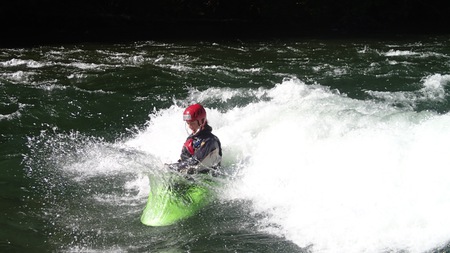 Ontario legend Heinz Poenn was a real influence – not only did he supply us with our first decent paddles, he had technical skills, and although I am not sure what he saw, he seemed to see the potential to improve hidden in us – and that spurred us on. I trained when I could, learned more, went to races and slowly began to improve. Training was second to school, but it was always on my mind. I wanted to get better and I knew I would have to make slalom a priority to do that.

In 1987, I had finished university, and I drove out to BC with my cousin Larry Norman- headed to Cultus Lake BC for the winter. He had done that 2 years before and now I was going to give it a try. I headed to BC with my skis and my C-1 and in the early winter, I tried to do as much of both activities as I could. Larry and I lived with two other paddlers, crammed in a very simple shack, surrounded by paddling gear we desperately hoped would dry before our next session. We paddled on the Chilliwack River at Tamihi rapids once or twice a day.

By mid-winter, I had put my skis away and was getting in my boat every day. I flipped a lot in those days, and so I remember a winter routine of waking, eating, paddling, trying to warm up, eating, paddling, trying to warm up, sleep. I was new to training but paddlers like Patrice Gagnon, Joanne and Stan Woods, Maylon Hanold, Scott and Paul Shipley and more would come up every weekend to paddle on Tamihi and that exposed me to a much higher quality of training and technique than anything I had experienced. Eric Munshaw was on the river bank every weekend coaching and his shop was always available for the regular boat repairs I had to make as I bashed about the river.

Between 1987 and 1996, I spent most of my winters training in Cultus Lake /Chilliwack, and over that time, the training group ebbed and flowed as different athletes showed up. At its peak paddler population, Tamihi training sessions had to be broken into 3 groups during full course race simulations to keep it all manageable – so there were probably 35 racers paddling at the provincial team or higher level. 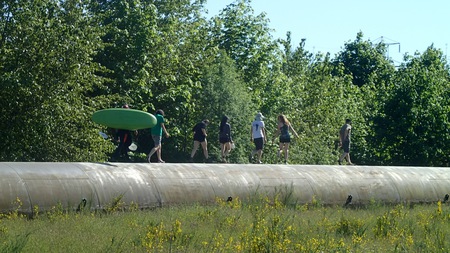 By 1991, Canada had hired its first full time slalom coach – Mike Druce – and he was also based in Chilliwack. With slalom re-introduced to the Olympic program for 1992, the winters of 1990 -1992 saw a roster of paddlers training at Tamihi which was a fair representation of the top ten world cup results on any given Saturday or Sunday. Paddlers around the world took notice, and many top racers planned their travel to include a short stop in BC to train at Tamihi as they went from one race or training camp to the next.

During the 1991 World Cup, there was at least one race where the entire podium of men’s kayak was filled by athletes who called Chilliwack home (Rich Weiss, Scott Shipley and David Ford on the podium but I forget the order). I was not one of them, but those kinds of results added to the Tamihi stoke in January when we were standing in the snow trying to figure out the moves.

It was the quality of that training experience which pushed my skills and allowed me to qualify for the 1992 Olympic team. There were 6 Canadian and 2 American 1992 Olympic slalom paddlers who lived and trained full time in Chilliwack, and many more who attended training camps based at Tamihi. Throughout the 90s, the quality of racers training at Tamihi continued, and this attracted lots of development team athletes to the area as well.

By 1996, I was unable to stay competitive at the international level and began to transition to my career as a school teacher. I became very involved in the local kayak club (Chilliwack Center of Excellence), and worked hard to run high quality slalom races and to help athletes gain access to quality coaching. I also spent a lot of my time introducing new paddlers to whitewater slalom, and building a strong club membership. I believed then and now that a strong club community is essential to nurture our top athletes and build our sport in a sustainable way. I coached the BC Junior team for a few years, and I was pretty proud of the young paddlers I worked with and what they accomplished. A highlight of that time for me was the size of the junior team that attended National Championships in 2001 – I am pretty sure that is the largest the BC junior team has ever been

Paddling remains a massive part of who and what I am. Professionally, I teach outdoor education, and kayaking is a big part of that. Personally, I spend quality family time on sea kayak and river trips with my wife and 2 children. Whitewater slalom is still a love of mine, and I continue to be involved as a volunteer at BC summer games, national championships and national team trials races in recent years. I also organize a youth kayaking festival each spring (CRYK FEST), where approximately 60 youth are taught by volunteer instructors on the Cowichan river.