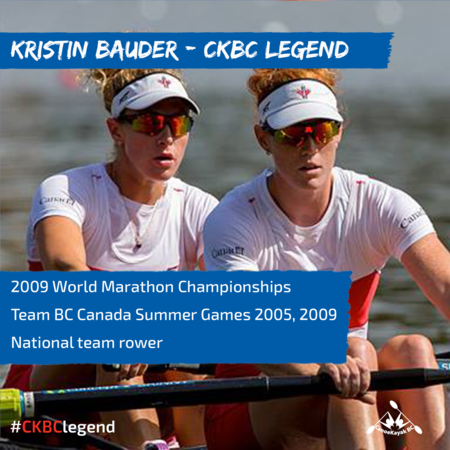 Kristin Bauder began paddling at the Fort Langley Canoe Club in 2002. Fifteen years later she is still on the water, just turned around and rowing! As a rower, she represented Canada at the 2015 Pan American Games and 2014 World Championships.

I learned to kayak at the Fort Langley Canoe Club back in 2002 as a fun summer activity with some friends. Little did I know, I would fall in love with the sport and race at two Canada Summer Games, every National Championships from 2004-2009, and even the World Marathon Championships in 2009.

My most memorable results were winning gold, silver, and bronze at the 2005 Canada Summer Games and winning the Frank Clement Memorial Trophy in the Junior Women’s K4 500m at the 2009 National Championships with Kiran Basra, Jessica Mitchell and Sarah Poole.

There are too many fun paddling memories to remember, but if I had to pick one I would say it would be one of my first spring training camps when it was held in Napa Valley. The friends I made during that training camp are still some of my closest friends today!

In 2010, I decided to step away from paddling to focus on my university studies, with the plan of eventually returning. However, to make a long story short, I had an opportunity to try rowing at Burnaby Lake in 2011 and two years later found myself moving to London, Ontario to train at the National Training Center.

I’m currently still training in London with the hopes of representing Canada at the 2020 Olympic Games in Tokyo.