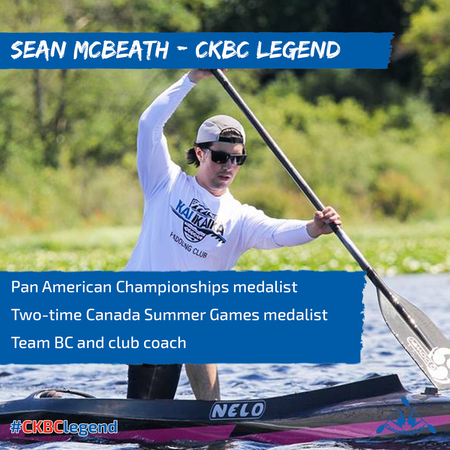 Sean McBeath became involved with sprint canoe in 1999 at the Ridge Canoe and Kayak Club, when he joined a CanoeKids program in preparation for a seven-day trip in Northern British Columbia – the Bowron Lake chain.

A CKBC Legend, here is his story of paddling in both Canada and Japan.

While initially competing locally, over the next four years he slowly worked his way up to competing provincially, and nationally for the first time in 2003 (Canadian National Championships).

In addition to his paddling endeavors in Canada, his status of dual citizenship with Japan allowed him to race abroad for many years. He was invited by the Japanese Canoe Federation to take part in their National Team Trials every year, allowing him to travel to Japan and paddle on several different bodies of water.

In 2008, he was offered a position on the Japanese National Team after winning the 1000, 500 and 200 m events at the team trials, whereby he respectfully declined to pursue paddling in Canada. A highlight of his success in Japan was meeting the Japanese Prime Minister, Yasuo Fukuda.

In addition to racing, Sean is fully certified level 2 coach in the National Coaching Certificate Program, and has his level 3 Theory component. He has many years of coaching experience in sprint canoe/kayak, surfskiing, outrigger and PaddleALL. He has been the provincial team assistant coach for the 2011 Western Canada Games, as well as a coach False Creek Racing Canoe Club, Vancouver Ocean Sports and Ridge Canoe and Kayak Club.

Since stepping away from full-time competitive training, Sean has received his Bachelor’s and Master’s Degrees in Applied Science of Chemical and Biological Engineering. His ideal career would involve working in the water/wastewater field, both in application and research.