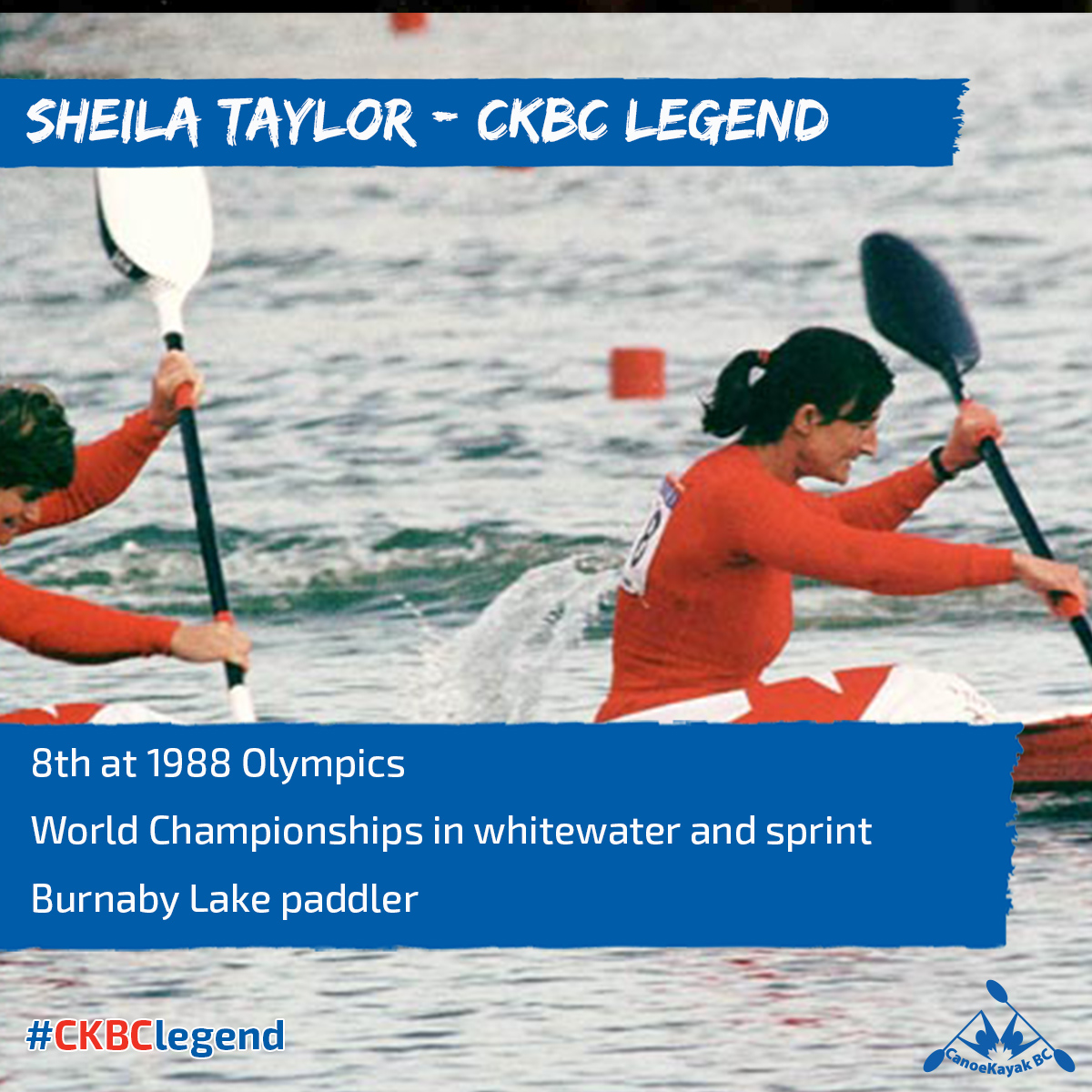 Sheila Taylor was a national level canoe instructor and spent her summers teaching canoeing from 1976-1980. Then in 1980, at age 21, she got a competitive boost when she began working at Strathcona Park Lodge on Vancouver Island. From there, she competed internationally in both whitewater and sprint.

Here in her own words, is how CKBC Legend Sheila Taylor went from canoe instructor to Olympian.

Strathcona Park Lodge (SPL) owner and family patriarch, Jim Boulding had hired me over a telephone interview when I was at school at University of Alberta. While I was at SPL, I taught canoe but on our time off, the staff would take off to run the Gold and Campbell rivers.

It was on these forays that I learned to kayak with Jamie Boulding and Dave Freeze among others giving me tips, providing Eskimo rescues, fishing me out of the water and chasing equipment. It wasn’t until the end of the summer that I actually learned to roll, thus Jamie affectionately dubbed me “Fish”.

Jamie also introduced me to his sister Annie saying that he thought I would make a good down river paddler. With this shot in the arm I began to train and eventually compete in whitewater races all over B.C, Alberta, then back East and over in Europe.

I placed seventh in the world Championships in 1985 after which, I was told that I fell one place short of national funding. This, on the heels of others being funded after placing in the top 10, made me seriously consider Don Irvine’s suggestion that I try my luck with flatwater. After all he had made the switch quite successfully making the Olympic team in 1984 in L.A.

Thus, I began my Olympic journey. I paddled under the Burnaby Lake Banner with such notables as Collin Shaw, Donny Brian and Hugh Fisher, and trained with C1 paddlers Drew Mitchell and Pete Liljedahl. I have very fond memories of regattas with these guys and even a 6-week junket to our coach Imre Kemechy’s home town in Hungary.

I’d have to say that the one most pivotal experience for me came the Olympic year at a Florida training camp when I was eliminated from the K4 and the K2 on the basis that my paddling style was not like the other girls. Thus, the only chance I would have to make the Olympic team was to make the K1. In other words, be the fastest boat at the team trials in May.

I was initially upset and leaned heavily on my wonderful support network back in B.C. I came home from Florida and put my nose down and trained my proverbial butt off under the guidance of Imre and with my fellow Burnaby training group.

The result… I blew the rest of the girls out of the water at the team trials winning my races by open water. I cannot tell you how good that felt to be in the driver’s seat, to be able to choose my Olympic boats. I chose K4 and K2.

At the Olympics in Seoul in 1988 my partner Barb Olmsted and I placed eighth in the 9-boat final which, was lower than I had hoped and expected given previous world results. However, Barb had injured her back upon arrival in Seoul and we had not been in the boat together leading up to our races. So, all things considered, not a bad result. We were the second best Canadian canoe team result; Larry Cain placed fourth in the C-1 1000m that year.

I paddled for two more years with respectable results at world championships in Bulgaria and Poland but being the oldest member on the team as well as feeling the tug of my biological clock, made me feel that retirement was the right course to take.

Sometimes I wish I had stayed on to paddle at a second Olympics in Barcelona however, that is merely hind sight and rose-colored sunglasses. I have two wonderful 20 something daughters and have recently taken up two new challenges: pursuing a Masters in Sport Counselling and being the Athletics/Activities director at an International School in the Philippines. Life is good!