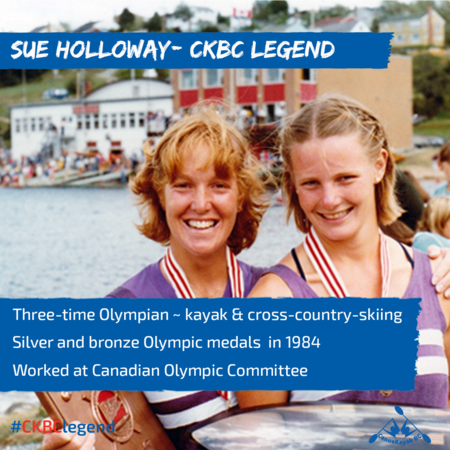 Sue Holloway made history in 1976 when she became the first Canadian woman to compete at the Summer and Winter Olympics in the same year. But her real success came after moving to B.C. for school and winter training. Although the 1980 Olympic boycott took one Olympics away, she retired with a silver and bronze medal after the 1984 Games.

I moved to Vancouver in the fall of 1976 after I had a rather busy year competing in the Winter and Summer Olympic Games. At that point I left cross-country skiing and focused on kayak. I grew up in Ottawa and our winters are not conducive to paddling (awesome for skiing)!

There was a great group of paddlers in Vancouver lead by Hugh Fisher and since SFU is very close to Burnaby Lake I decided to apply there. I moved primarily for the training opportunity and the school was conveniently located close by.

A number of paddlers from Eastern Canada decided to move that year including Gregg Smith, Jeremy Abbott, Alwyn Morris and my training partner Elisabeth Arnold. It was a fantastic training environment and even though we did not have a coach with us on the water we pushed each other and it worked well.

My results steadily improved after I started training in B.C. We would go to California in the fall and spring as well as Florida training camps. In the summer I would come back to Rideau (Ottawa) and travel with the National Team.

In 1979, the year prior to the Olympics I had my career best K-1 result at the World Championships. I came 5th.

But then in 1980 Canada boycotted the Olympic Games. I was devastated and I took some time to reassess my dreams and goals.  I decided to keep paddling but I switched schools, got my degree from UBC and put on a final push for the 1984 Games.  In Los Angeles raced with Alexandra Barre in K2 and finished 2nd. We joined Barb Olmsted and Lucie Guay in the K4 and came 3rd.

When I retired in 1984 I went to work for the COC and created the Athlete Services portfolio. I was responsible for special events like the Olympic Gala and Canada Olympic House.

Currently I have a number of volunteer commitments including Co-Chair of Ottawa’s bid for the 2021 Canada Summer Games. I am also event partner of a major Olympic fundraiser in Ottawa called Gold Medal Plates. I coach cross-country skiing and dragon boat and still compete in as many water sports as I can!

My favourite paddling memory from B.C. is paddling down the Fraser River in a pleasure canoe with the SFU outdoor club. Coming from Ontario that blew me away! I always love paddling on my home course on the Rideau River.

Photo:  Elisabeth Arnold and I after winning the Canadian Championships in K2