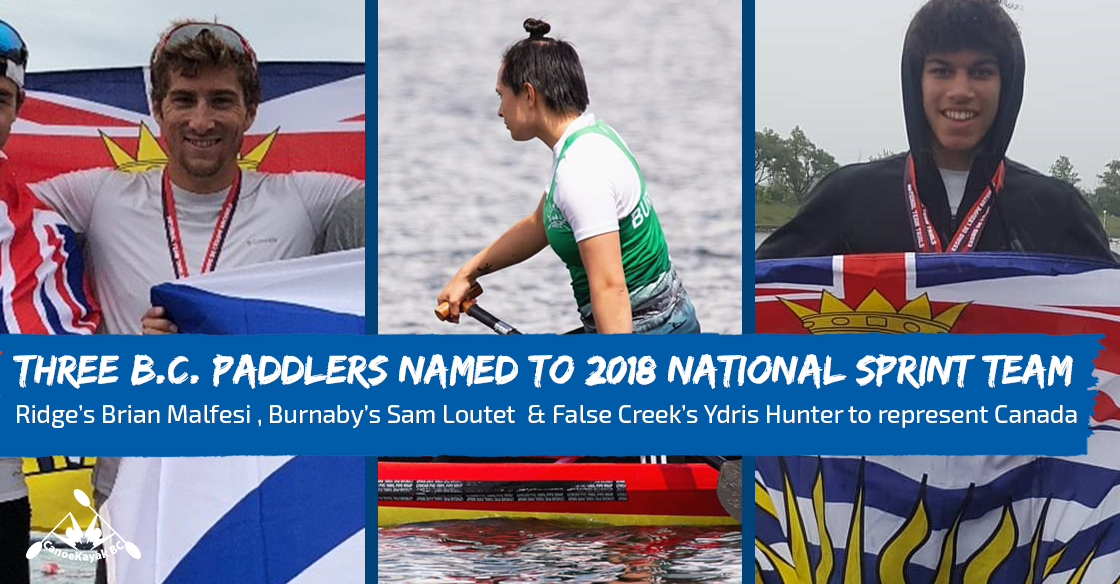 Brian Malfesi (Ridge), Sam Loutet (Burnaby) and Ydris Hunter (False Creek) are among the athletes named to Junior, U23 and Senior National Sprint and Paracanoe Teams by Canoe Kayak Canada. The trio were selected following their results at the recent trials in Montreal.

Malfesi was named to the Senior Men’s Kayak Team and will represent Canada at the Senior Pan American Championships in Dartmouth, Nova Scotia from September 13-16. Representing the Ridge Canoe & Kayak Club in Maple Ridge, Malfesi is coached by Frédéric Jobin and Tessa Nagai.

Loutet joins the Junior Women’s Canoe Team and will paddle at the Junior Pan American Championships in Dartmouth, Nova Scotia from September 13-16. Loutet paddles for the Burnaby Canoe & Kayak Club and is coached by Peter Majewski.

Meanwhile, Hunter was named to the Junior Men’s Canoe Team and will paddle at the Olympic Hopes International Regatta in Poznan, Poland from September 14-16. This is his second time competing at this international regatta. Coached by Diane Tam, Hunter represents the False Creek Sprint Canoe Club in Vancouver.

“The third set of the National Sprint Team Trials in Montreal was the last opportunity for Canoe Kayak Canada and the High-Performance Committee to finalize the selection of our teams,” explained Graham Barton, Chief Technical Officer at CKC. “Our Canadian athletes have demonstrated impressive performances over the course of the World Cup season and National Team Trials. I am excited about the potential of our teams as they head to their International Championships over the remainder of the competitive season”.

Canadian athletes were selected to compete in one or more competitions to take place later during the summer. The selection was based on the 2018 Selection Criteria published earlier this year on the Canoe Kayak Canada website.

The international canoe sprint competitions include:

*There will be a race off for these athletes.