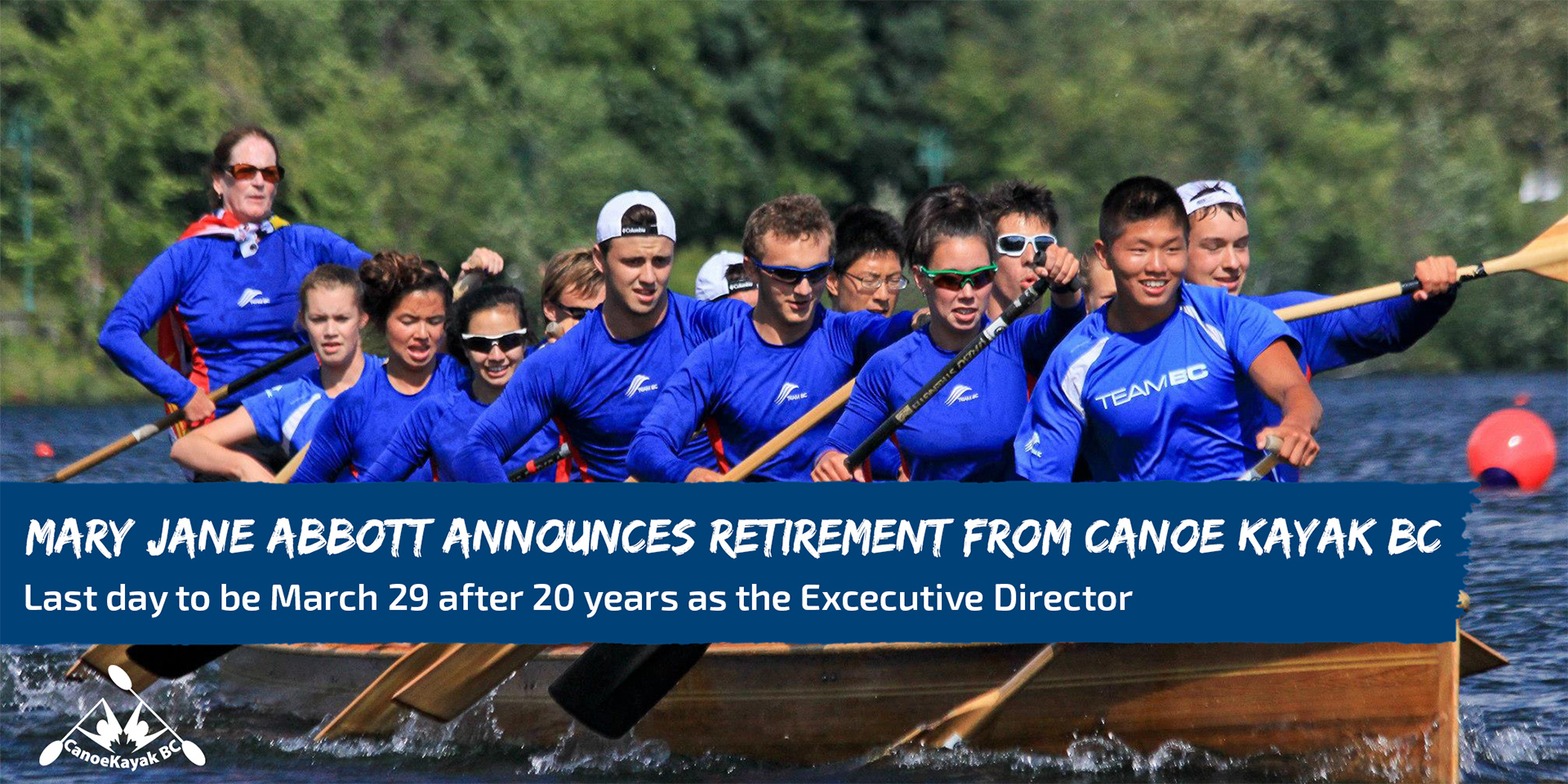 Before we get further into the new year, it's with considerable regret that I must announce the retirement of our Executive Director, Mary Jane Abbott, on March 29 of this year.

Most of us know MJ but, new or not to our community, please join me while I take you back into her history, just a little, to reveal some of the reasons she has been a profound presence and integral guide for CKBC these many years. 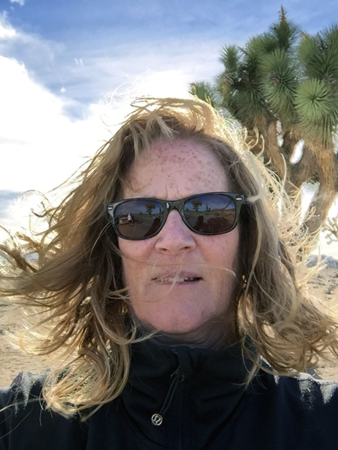 MJ gritted her teeth at 12 years old when her mother signed her up for a Mississauga Canoe Club summer program. She wasn't happy about having to prove her swimming ability in the murky Credit River but she did and in no time she became an avid paddler.

During high school and her early years of university, she earned coaching credentials and, with Mari (Bruce) Ellery, led a 100+ Bantam program which included five Men's and three Women's War Canoes with the likes of athletes Bill Trayling, Erick Smith and Doug Tutty. In 1979, she coxed Mississauga’s Senior Men's War Canoe to a silver medal in the last Open Mile race. But, I'm getting way ahead of myself, easy to do with the rich archive of MJ's life in our sport.

Back in January of 1976 a group of young maverick athletes, Jeremy Abbott and John Edwards, among them, headed to B.C. where they could study at Simon Fraser University and still prepare for the Olympics that lay ahead that summer. MJ, who had been studying at the University of Waterloo, was met at Vancouver Airport by Jeremy and Hugh Fisher when she landed. After six weeks here she decided to transfer to SFU, returning to Ontario only for summers.

MJ and Jeremy were married in 1979 and MJ graduated in 1981. Jeremy was a member of both the 1976 and 1980 Olympic teams. He became the BC Provincial Coach, a national official, and earned his Masters in Biology at Simon Fraser University. Their first son, Matthew, was born in 1986.

In September of 1988 MJ was seven months pregnant with their second son, Christopher. Jeremy was working as a biologist for the Federal government, surveying salmon stocks in the Vanderhoof area, when both he and another passenger, Michael Fretwell, were killed in a helicopter crash.

One positive outcome of this horrific tragedy was the establishment of the J. Abbott / M. Fretwell Endowment Fund which funds an award named after both men. The award provides annual fellowships to graduate students, with strong sports backgrounds, in Fisheries Biology at SFU.

When MJ first arrived in BC she immediately became invested in canoe and kayak in a multitude of ways. She delivered multiple school programs, including successful spring and fall War Canoe with Alwyn Morris. She coxed Senior Men's War Canoe with Burnaby to a silver medal in 1983 and coxed many other Burnaby War Canoes, including when she was six months pregnant with Matthew. She volunteered as Treasurer of what was the provincial paddling association at the time.

After successfully growing Rhythmic Gymnastics as their ED, she was hired in 1999 at Canoe Kayak BC as our only employee, a part-time Executive Director, when her third son Ryan was four years old. From there she guided this organization's growth to a full-time staff, including Provincial Coach, Sport Development Coordinator, Regional Coaches and a Communications lead. These were all jobs which MJ had been juggling alone, these many years, along with nameless other tasks and projects.

Her volunteer work was not limited to CKBC. MJ was accredited as a National Level official in 1979. She has sat on a number of Canoe Kayak Canada committees since the mid-1980s – High Performance, Domestic Development (which she is still on), served on the CKC Board, on the Sprint Racing Council, and was the Commodore of Canoe Kayak Canada from 1990-1992.

She was the manager of the 1981 Canada Games in Thunder Bay. She has loved the Games and has had a long history with multi-sport games attending them as an athlete, manager, coach, official and mission staff, until 2015. She was a Ridge Canoe Kayak Club member and volunteer in the early 2000s, when Matt and Chris began paddling there, and she was a co-founder of Pitt Meadows Paddling Club around 2006.

In Maple Ridge/Pitt Meadows she was also a founding member of the Operation Red Nose program in 2009, KidSport in 2010 (where she continues to serve as Treasurer), and was a long-standing board member of PacificSport Fraser Valley. 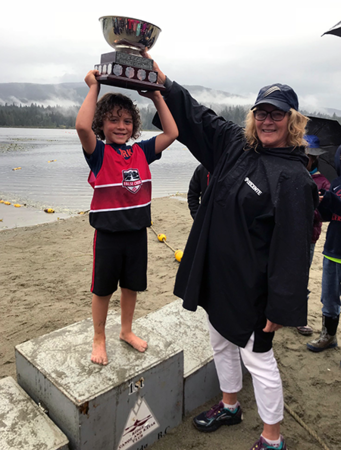 This is not an exhaustive list. The above only touches on the rich narrative which helped frame Mary Jane Abbott's leadership in our sport. One need only talk with a Sport Administrator or Sport Funder to be struck with the respect and reverential regard with which MJ is widely held and by how much her input is solicited.

There is much I can't begin to unpack from her involvement these past years; her benevolent, charitable, often anonymous acts; her volunteerism; her tolerance and patience when stretched six ways from Sunday with our simultaneous demands; her loading/unloading trailers, driving accumulated thousands of kilometres, schlepping of boats, equipment, tents, gear, back and forth to regattas; her magnanimous shopping and prepping of tens of hundreds of meals for camps, meetings and conferences; her generous “free” storage of all things CKBC/clubs, at her home; her acuity to think out of the box and ingenuity to always come up with another option or solution. The list goes on. Show me Executive Directors who perform over and above their job description to this extent. Many thankless volunteered hours and many unacknowledged overtime hours – through plenty of critiques of ours, which she shouldered.

Yet, despite the density and demands of her work/volunteer hours, of guiding our provincial organization, of raising three sons, MJ actively filled her free time with beloved hobbies of skiing, curling, biking, swimming, gardening, paddling and walking her dogs over the years.

MJ brought her wealth of experience, knowledge, and expertise from the multitude of roles she has had, to the benefit of Canoe Kayak BC, and of us all. She has always looked for ways to improve CKBC and the services we provide to our members. It is safe to say she has successfully coxed this expansive, often unwieldy, vessel forward with resourcefulness and resilience.

I've attempted to impart the breadth of her contributions through this heftily chronicled acknowledgement, yet have fallen short. I hope it's given our community pause and an opportunity for reflection. I am presenting members with a few months warning of MJ's retirement so that you might consider sharing a moment with her, over the next several weeks, to let her know of your appreciation, if not for everything she's done for us all, then perhaps for something in particular that you know of or remember that was meaningful or made a positive difference to yourself, your child, your family, your club.

While I do not want to see MJ leave the helm of CKBC I'm excited for her to begin such a well-deserved new chapter in her life, that of retirement and travel. Please join the Board and myself in wishing Mary Jane a retirement abundant with all she would want for herself.