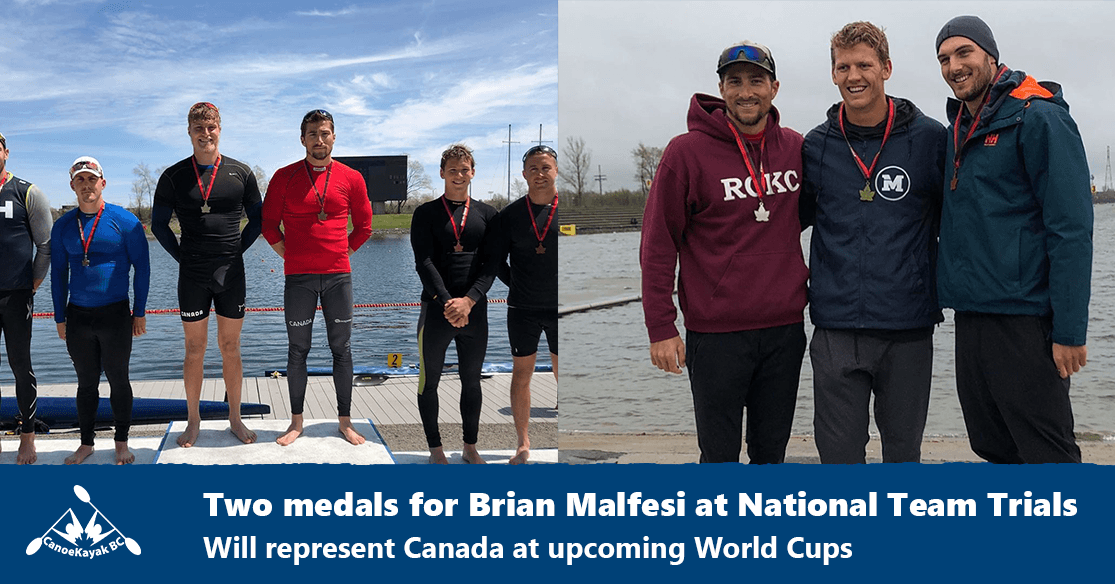 Following the trials, Malfesi was named to the Canoe Kayak Canada's men's kayak team for World Cups in Poznan, Poland from May 23 to 26, and in Duisburg, Germany, from May 30 to June 2.

Also on the podium at the trials, was Burnaby Canoe & Kayak Club's Alex Brent. Brent joined Olivier Courchesne (Trois-Rivieres), Victor DeSaulniers (Trois-Rivieres) and James Lavallee (Toba) to win bronze in the men's K-4 500 in a time of 3:45.892.

Brent's Burnaby teammate, Samantha Loutet won gold in the C-1 200 Junior Final in a time of 0:58.572 ahead of Katie VanBerkel (Senobe) and Gabrielle Bowman (Burloak).

The final member of B.C.'s contingent at the trials was Ydris Hunter who was sixth in the C-1 1000 B-Final.

After the trials concluded, Canoe Kayak Canada's Chief Technical Officer Graham Barton said, “Our coaches were very pleased with the results this weekend. We will be sending a team that will battle it out for selection to the 2019 Senior World Championship Team at two World Cups later in May and a small team of juniors to compete at an international regatta in Brandenburg, Germany. I believe our teams will be very competitive as we start the summer of 2019.”

Canoe Kayak Canada will be holding another National Team Trial event in Dartmouth, Nova Scotia from June 21st – 23rd, where more team selections will be made.

The races this weekend were live-broadcasted and can be found on Canoe Kayak Canada’s YouTube page. Results are available at ckc.immediac.com.